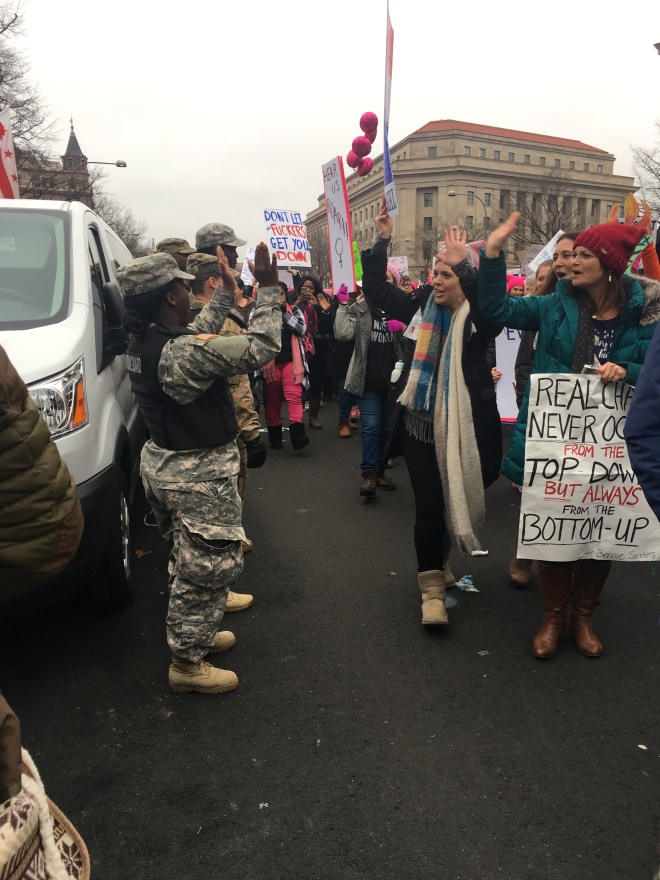 For some people who attended both the Women’s March on Washington, D.C., on Saturday and President Donald Trump’s inauguration, which took place the day before, there was a definite difference in the air.

For many, they felt the inauguration was negative, with people on opposing sides yelling at each other and anger in the air. During the march, people including Fran Chock and her mother, Ione Chock, felt only hope and solidarity.

The number of people who attended the march is still up in the air, with estimates ranging from 500,000 to over a million, and more than 600 “Sister Marches” were held around the globe.Despite the sheer volume of people who took to the streets, no arrests were made and there were no reports of violence, according to D.C. authorities.

For Ione Chock, who turns 90 in just a few weeks, this peace among fellow marchers made the event far different from other protests she has taken part in. In her lifetime, the York Township resident has participated in a number of marches, from Vietnam War protests to marches in support of Planned Parenthood. In those marches, there was anger in the air, she said.

“This time it was honestly weird,” Ione Chock said. “It was happy.”

Fran and Ione Chock attended the march with more than 20 members of their family and friends. Fran Chock is from Spring Garden Township, and she brought her 15-year-old daughter and her daughter’s friend. To experience the march with so many members of her family, including her brother and sister-in-law, her nieces and nephews and their extended family, was an exciting aspect for her.

Though Fran Chock and her family have marched before for human rights, she agreed with her mother that the solidarity of this march made it far different for her.

“It really matters to us,” she said. “We just stand for humanity and human dignity and equality.”

The Chock family and their friends were marching for human rights. Ione Chock said she was marching so the government wouldn’t eradicate some of the things she’s marched for before, such as Planned Parenthood and Roe v. Wade. They were all hopeful the new administration under Trump would see the sheer number of marchers around the globe Saturday and rethink some of their stances on such issues.

Deb Yonick, president of the York County Federation of Democratic Women, joined the Chock family during the march.

She said the march was phenomenal. She’s hopeful that it will encourage more women and people in general to become involved in government, from the local level up.

“I want to see all of us hold our elected officials responsible,” Yonick said. “You can’t just vote and turn around and go back to your normal lives and not pay attention.”

Other marchers were there to protest Trump’s election. Trump and his supporters have said he had a mandate after winning the Electoral College, despite losing the popular vote by more than 3 million. Marchers including Aya Matsumoto from Monmouth County, New Jersey, were there to prove them wrong.

“I don’t want them to think that because of silence they have a mandate,” she said.

Mark Miller traveled from New York City to participate in the march. He was there to show his solidarity on women’s rights and LGBT issues, saying the march was empowering.

“It’s great to be surrounded by like-minded people,” he said.

As marchers made their way along Pennsylvania Avenue, groups of people on the sidewalk cheered them on, posing with their own signs and moving to march with them.

Maggie Dineen, 10, and Olivia Robitsek, 9, traveled from Long Island, New York, with their families to participate in the march. They helped encourage those walking by starting a “girl power” chant.

“A lot of men don’t believe women can do what men can do,” Maggie said of why it was important to be at the march.

Though the march was generally positive and peaceful, counter-protesters did make their way to the streets. Groups of individuals walked through the crowd and used a megaphone to tell women to “get back into the kitchen,” and repent for their “gender confusedness.”

When confronted with these protesters, marchers shouted back “Love trumps hate” or told the counter-protesters they loved them anyway.

Moving forward, marchers such as the Chocks said they are hopeful the Trump administration will realize the wishes of women, minorities and Democrats and take those into account when creating policies.

“I felt it was not really about women’s issues; it was about human issues,” Ione Chock said.